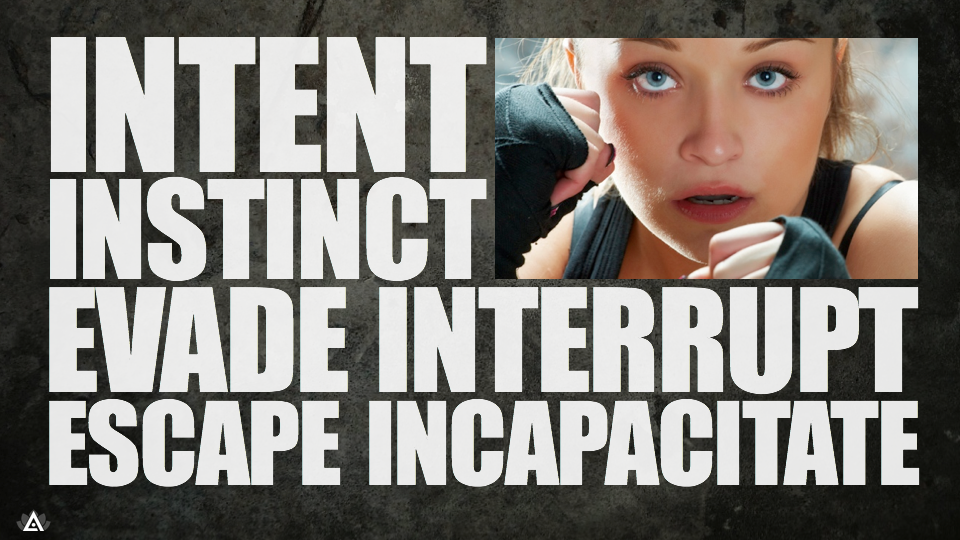 The Six Strategies of Fearless.Yoga

The strategy of most martial arts is simple: knock the other guy out. Fearless•Yoga takes a much more methodical approach. First, don't get hurt. Next, control the attack, constantly improving your position to create targets of opportunity. Finally, either escape completely or incapacitate him totally. The training gives you a clear sense of direction at all times, even in the chaos of an assault.

The Fearless•Yoga approach also has an over-arcing set of strategies. To be exact, there are six key strategies that we're going to absorb. To make them easy to remember, we simply call them the I's and E's.

MARTIAL STRATEGY
When we look at most martial arts, we are seeing various ways for human beings to hit each other. When you strip away all the fancy technique, most of it boils down to what we call "fist to face." This is exactly how our biology and our hard-wired behavioral programming wants us to fight. These fights end when either (1) one fighter gets knocked out, or (2) he takes so much cumulative punishment that he cannot continue.

Here's the programming trick: people wake back up after being knocked out. They slink off to lick their wounds after being beaten, but they recover. "Fist to Face" fights usually don't do any significant, lasting damage; it's mostly cosmetic. The human head is essentially a helmet made of bone, and it's really hard. The human hand is not an impact weapon. Its a soft, flexible tool for grasping and manipulating things and its made of small muscles, thin, fragile bones and lots and lots of sensitive nerves. If you use it to hit hard objects with a lot of force, you're going to break it. The equation of a relatively fragile fist against a relatively hard face typically means that we have to back off the power.

Consider this: there is a massive difference between humans fighting each other, and a human being killing an animal. Ever see a farmer go out to slaughter a cow or a pig by punching it in the face? What's going to happen to the guy who's attacked by a bear or a tiger, and his strategy is to punch the animal in the face?

All of this martial arts talk about hitting is just our collectively civilized version of dominance games. Its all very ritualized and follows rules instilled to establish a pecking order without members of the species getting killed.

But self-defense against assault has nothing whatsoever to do with dominance games. It is much closer to being the victim of an animal predator who sees you only as a resource, only as a hot meal. The predator has as much sympathy for you as you have for a Big Mac™. If you wouldn't punch a bear in the face, why would you use that ineffectual strategy against a human predator? 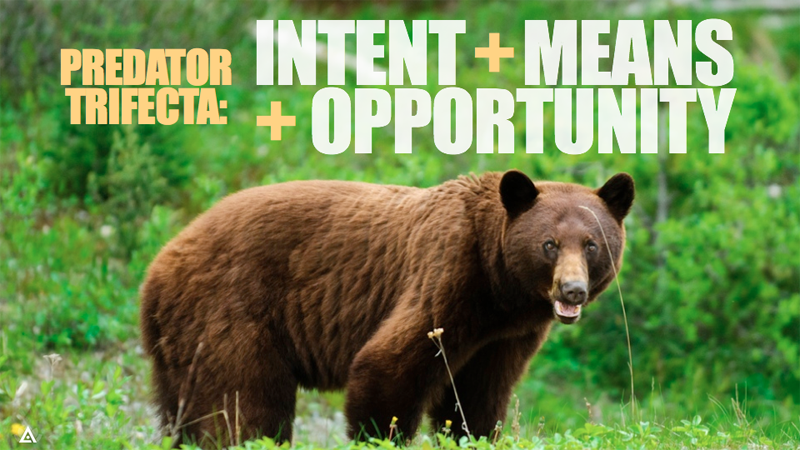 HIKING WITH BEARS
So, how would a human being defend himself against a much bigger, much stronger grizzly bear?

Your first strategy is to pay attention to your INSTINCTS and not go where bears roam. You want to go hiking in the woods. Bears like to roam the woods, too. Simple solution: stay out of the woods that have bears.

So you have it all figured out, and have selected a bear-free park. The brochure clearly says that there are no bears here. The park ranger assures you that the woods are completely safe. The trails are well-marked and regularly patrolled. Great! You happily set out on your hike. Hey, look! A bear!

Here is strategy number two: avoid the grizzly at all costs. Yes, you've been told the forest is safe, and yes, you have every right to be there. But if you see a grizzly pop up from behind a bush, you get out of there. It doesn't matter that you have a basic human right to hike in the woods. You don't care what the grizzly thinks of you. When you see a predator, you EVADE the encounter.

If you get out of the grizzly's territory quickly, don't act like a threat, and if he is not specifically in need of a snack, then he may have no INTENT to attack. Awesome! No one gets hurt, and you keep on hiking where there are no bears.

But, maybe our grizzly DOES have INTENT. Maybe he's really tired of humans stomping through his woods dropping their trash and scaring the squirrels. Maybe he's really hungry and you look really tasty. Or maybe he's just evil and really likes that squeaky sound that humans make when chewed on. Now the intensity of the encounter just increased exponentially.

When a predator targets you, ESCAPE. Saying, "Nice bear," in a soothing voice isn't going to work now. Acting non-threatening or submissive is essentially saying, "I give up. Please kill me quickly." No, your best choice is to RUN. If you can get away, it doesn't matter about the bear's INTENT. You've just removed his OPPORTUNITY for attack. Pump those legs and hope that you're faster than Mr. Grizzly.

But what if you're not alone? There's that funny story about the two hikers being chased by a bear. One hiker says, "You think we can outrun him?" The other hiker says, "Don't have to, I just have to outrun YOU." Funny, right? What if the other hiker is your daughter?

Yeah, those brake lights just came on. Or maybe you were hiking without sensible shoes. Or maybe you've run to the edge of a cliff. For whatever reason, Evade didn't work, and now Escape didn't work. As he's closing in, you've got one shot. When a predator threatens, INTERRUPT.

Yell! Scream! Throw a rock or swing a stick. Do something to change his mind about turning you into Bear Chow. If this particular grizzly is new at ripping up hikers, maybe you have a chance to convince him that it would not be SAFE for him to attack you, or that you would simply be more trouble than you were worth. We're back to changing INTENT, only this time we're going it aggressively. Smack him in the snout with your iPhone. Sling that backpack at him. No, you're not going to "defeat" him, but maybe you can get him to say, "Screw this, I'm gonna go find some fish."

THE PREDATOR TRIFECTA: In order for self-defense to be justified, you will be required to demonstrate that the bad guy had INTENT, MEANS and OPPORTUNITY. By intent, you knew by his words or actions that he intended to hurt you. By means, it was clear that he was physically capable of causing injury, perhaps because he was bigger, stronger or had a weapon. By opportunity, he could physically reach you. Remove even one of these three elements, and you've eliminated the predator's ability to hurt you.

Hopefully that worked. You've now ticked your way through a number of decent strategies: Instinct, Evade, Escape and now Interrupt. But if those tactics didn't work, the grizzly now has the perfect predator trifecta: INTENT, OPPORTUNITY and MEANS. The "means" part is that he's bigger, stronger, and has teeth and claws. What have you got?

Your pearly-white teeth and neatly trimmed nails are no match for this guy. Unless you spend hours at the gym everyday morphing yourself into a super-hero, you're not going to slug it out with him. You're a normal human being, and that means you have a brain and you have hands that are really good at grasping and manipulating.

To make use of the brain, the first thing you have to do is DON'T PANIC. Fear just shuts the brain down, so don't spaz out. Think. Find a weapon. If all you have is a moist towelette, then you have to become a weapon. Right here, everything turns around. Either you become the predator you you become pizza. When a predator attacks, INCAPACITATE.

At the conclusion of our hypothetical Hiking with Bears scenario, you're left trying to decide if a bearskin rug would match your living room decor. In the Real World, where the "bear" was a Bad Guy, you're giving your statement to the police officer. The ending is very different, but a lot of the strategies leading up to that are very similar. INSTINCT, EVADE, ESCAPE, INTERRUPT and INCAPACITATE are what you will use to stay safe. But there's one more.

In order to pull off that DON'T PANIC part, you would have had to thought forward to the possibility that this could happen. You mentally prepared yourself, got training, and said to yourself, "If I am ever attacked, I know what to do." Because predators exist, you must establish INTENT. Just like the predator's intent to harm, you have to have an unflinching resolve to defend yourself, even if that means causing grievous bodily harm to your attacker.

Together, these six strategies form the backbone of Fearless•Yoga. In this guide, we're going to talk about each of these. Hopefully, concepts like INTENT, INSTINCT, EVADE, ESCAPE and INTERRUPT already make sense to you. Those strategies have your highest probability of success, and it would be best if that is all you ever need.

You'll notice, however, that we quickly glossed over the INCAPACITATE part of our encounter with the bear. To be honest, the techniques we cover are not going to be very effective against grizzlies. We do have a technique called the "Lion Killer," but I wouldn't recommend taking it to the zoo. The techniques we're going to learn are designed to incapacitate a human predator, even one that's bigger and stronger and maybe using a weapon instead of fangs and claws.

The most important lesson is that you are not fighting. This is not a competition for social dominance. When we say "Bad Guy," you think "Grizzly Bear." You're not dealing with an "opponent." You're dealing with a predator.

Next: Ready, Set, GO!
If you've been reading sequentially, you now have a clear understanding of the goals of Fearless•Yoga, understand the basic training methodology, know the origins of the techniques, and see how contextually everything fits together. Now it's time to get started, so dive into Session One where you'll begin learning the first postures, movements and techniques.